Ehrgeiz: God Bless the Ring (German: lit. "Ambition") is a fighting game developed by Dream Factory and released by Namco in 1998 for the arcade platform. It was ported to the PlayStation and published by Square Co. in 1998.

Ehrgeiz differs from most 3D fighting games by drawing heavily from the concepts of wrestling games and Dream Factory's own Tobal series, which allow for full 360-degree movement and do not require fighters to be facing each other at all times. This restricts the camera to a more or less fixed position, zooming in and out with the action, but not tracking around the arena as would be common in most other 2D and 3D fighting games. The fast-paced fighting allows for characters to move freely in a 3-dimensional stage which is filled with many interactive objects and changes in elevation, allowing characters to leap on top of crates or use them as weapons, for example.

Perhaps the most noteworthy feature of the game is the inclusion of characters from Final Fantasy VII. Cloud Strife, Tifa Lockhart, Sephiroth, Yuffie Kisaragi, Vincent Valentine and Zack are playable fighters, although the last three must be unlocked by various means. In fact, Ehrgeiz is sometimes affectionately known as "The Final Fantasy Fighter" by its fans due to the appearance of these characters. Ehrgeiz is highly sought after by Final Fantasy game collectors, due to it not making the Greatest Hits list and not being re-released.

The PlayStation version includes a Dungeon mode similar to Tobal 1 and 2's Quest Mode. Players fight through an extensive dungeon crawl, much like the Blizzard title Diablo, and can equip different weapons and items. There are also several smaller mini games, such as a race mode, where players run laps around a course, engaging in combat to slow down their opponent, and a board game similar to Reversi.

Ehrgeiz’s main tie to the Final Fantasy series is the ability to play as a number of characters from Final Fantasy VII. These characters are Cloud Strife, Tifa Lockhart, Sephiroth, Yuffie Kisaragi, Vincent Valentine, and Zack. Cloud, Tifa, and Sephiroth are playable immediately, while it is necessary to unlock the rest by beating the game with different characters. Ehrgeiz also features music arranged by Nobuo Uematsu.

Quest mode is a "Hack and Slash" Action RPG styled mode of gameplay in Ehrgeiz. It begins in a dungeon in a parallel universe, and later moves to a nearby inn. The player can explore the town and enter the dungeon, which contains randomly generated maps. Somewhere on each floor of the dungeon will be a stairway to the next level downward in the dungeon. Since the main characters are archaeologists, the goal revolves around going as deep in the dungeon as possible in the hopes of finding great artifacts.

The character development system revolves mainly around a 5-point chart representing which statistics will be increased in the character upon raising his/her level. Raising Protein, Vitamins, Minerals, Carbohydrates, or Lipids on the chart will in turn increase Attack, Magic Attack, Dexterity, Defense, or Speed, respectively. The diagram points and stretches towards each of these points. As one point is focussed on, the diagram will contract on the other points of the diagram. Thus, increasing how much one stat will raise will lower how much the other stats will raise.

There are several recipe books hidden throughout the Quest portion of the game's dungeon. Wine trading is available after getting the second recipe book and talking to a man in a restaurant in the town. The player can buy and trade wine here much like a stock market, where the value of the wine will go up and down periodically. Players can then trade back the wine (sell your stock) to earn either loss or profit. 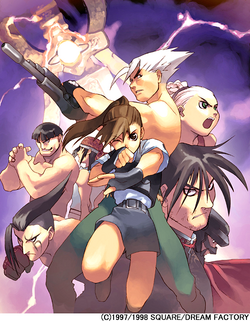 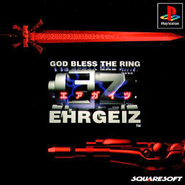 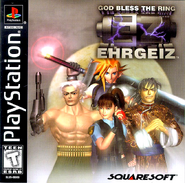 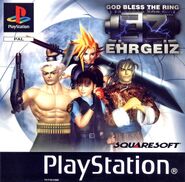 PAL
Add a photo to this gallery 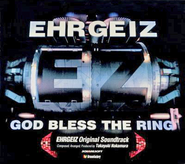 Yoko figure
Add a photo to this gallery

Retrieved from "https://square.fandom.com/wiki/Ehrgeiz?oldid=10975"
Community content is available under CC-BY-SA unless otherwise noted.