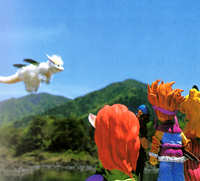 Secret of Mana (聖剣伝説2 Seiken Densetsu Tsū, lit. " Holy Sword Legend 2"), is an action role-playing game developed and published by Square (now Square Enix) for the Super Nintendo Entertainment System. It was later re-released on the Wii Virtual Console. Secret of Mana is the second installment in the Mana series. This is the only Mana game released on the SNES outside Japan. Most players outside Japan were introduced to the series through this particular game. Rather than use the traditional turn-based battle system of games like Final Fantasy and Dragon Quest, Secret of Mana uses real-time battles akin to the Legend of Zelda series' games, but with the statistical-based elements of the RPG genre and a unique "ring menu" system. With its brightly colored graphics, expansive plot, and soundtrack by Hiroki Kikuta, Secret of Mana is considered an influential game of its time.

Retrieved from "https://square.fandom.com/wiki/Secret_of_Mana?oldid=11209"
Community content is available under CC-BY-SA unless otherwise noted.