"Always getting me in trouble, you had me worried."
—Sion

Sion Barzahd is a playable protagonist from The Bouncer.

Fighting Style: A personalized style of both kenpo and street fighting.

A bouncer at the bar, "Fate". He lost his love two years ago, which has caused him to distance himself from others. However, Dominique's innocence is slowly helping Sion to open up again. Sion always wears silver necklaces, and his favorite brand of clothing is DOG STREET.

Orphaned as a child, Sion encountered Wong after watching him participate in a street fight, and was taken in by him under as both his son and disciple. Living with him and training in Wong's martial arts, Sion also grew up with Kaldea Orchid, a smart and curious, yet frail girl. Everything appeared to be going swell for Sion - until Wong mysteriously vanished when he was 14. He eventually got involved in a relationship with his childhood friend, and congratulated her on being hired for a prestigious position in the Mikado Group. Later on, her parents informed Sion that Kaldea died in a most unfortunate work-related accident.

Sion's feelings of sorrow at the loss of his loved ones soon turned into resentment and anger, as he picked fights and desired for someone in the dangerous slums of Edge to end his life. Being directed to the saloon of FATE on Dog Street, Sion stirred up a large bar fight, and attempted to provoke the attention of Volt Krueger to kill him. Surprised at his tenacity and endurance, Boss offered him the chance to turn his life around and start again with the opportunity of being a bouncer.

The game takes place on the night during Sion's first anniversary as a bouncer working at the bar, Fate. It was a slow night, as always, and Kou brought up the fact. Dominique wanted to give him a present, which was a pendant, for the occasion. Unfortunately, the place was ambushed by Mikado's special forces led by Mugetsu. She was abducted during the melee, and Volt informed him she was taken to Mikado. Since then, he has been their personal informant. Volt and Kou decide to team up with Sion and they go through the dangerous streets of Edge to get to the cargo train which is set to leave in 30 minutes. He meets a mysterious black panther, which seems to be stalking them. They get to the train as stowaways and encounter Echidna, who was Volt's former partner. They defeat her then the train was attacked by Leann in the Orage, disabling the brakes in the process. They managed to escape using a card key and took over an Air-Carrier which took them to Mikado's headquarters.

Sion saw Dominique through the dome and the scared pilot left Volt to drive it, resulting in a crash land. They eventually meet up with Mugetsu, and Sion took him out after he mocked him on never getting Dominique back. He vows to never lose anyone else...ever again. They venture toward the tower, but it was blocked by a deep pit surrounding it. Then Sion found a tree and listened to a piano playing a familiar, sorrowful tune. He then had a flashback two years ago, when Kaldea's parents were devastated of their daughter after a work-related accident. After that, he witnessed Dauragon killing his mentor, Wong. He ran to save him but was too late as he persuaded him to stop Dauragon under his last breath. Dauragon realized he studied under his master, which explains he's been so "difficult to deal with." Sion proved it to him after a fierce battle with him and the panther, and he noticed he was fighting with one hand behind his back. Sion suffered from a sucker punch and blacked out before the bouncers fell underneath the floor.

He wakes up in a storage room, alone. And with all his anger, he bashed through Mikado's numerous assassins, including a few deadly robots. He later came across a computer which had vital info of the Mikado Group: from Mugetsu, to PD-4, to Kaldea Orchid. Apparently, there wasn't an accident, as Dauragon was using her as a test subject. It resulted her aging ten biological years. He then saw Dominique but he needed a password to learn about the A2 project. Then, it was destroyed by an enemy. He momentarily encountered the panther twice during the assault, and it challenged him a second time. After he defeated her, she can transform into a human, but he can't tell who it was. He chased after it which led him to Dominique, and an ambush by Mugetsu. Volt and Kou came, too and helped him out. Sion was reunited with her after Mugetsu fell again, and Volt suggested the rocket tower. Alas, there were enemies waiting for them. He goes to escort Dominique as they descend, while Volt and Kou distract the guards.

After a painful escort mission, they find an elevator. Dominique reveals that she hates Mikado and Wong helped her escape. That was when she met him for the first time, and she was living a happy life since then. He promises her they will leave together in one piece. As they found a lift, they met PD-4 who forced Dominique out of comission. Before he attacks Sion, Volt and Kou met up with him. They defeated him then five more show up, changing the odds. Then, Dominique went berserk as the satellite shifted. It was revealed she's a robot, taking out the androids with devastating ease. She collapses and Mugetsu takes her away to the Galeos. Sion was incredibly shocked, and Volt tells him that he was Master Mikado's bodyguard. The android was a replica of Dauragon's dead sister, and he and Kou encourage Sion to go with them to the Galeos. They meet Echdina again and the battle was more serious with the gigantic robots. She was defeated and she uveils that Dominique is with Dauragon and the Galeos is already taking off.

They use a nearby Air-Carrier, and Mugetsu challenges the trio for a final showdown. He fell off the vessel and was incinerated by the Galeos' boosters. They met up with the black panther once more, and if Sion is chosen, then the player sees a revelation that it is Kaldea. She reveals she was being experimented by bionoid technology so Dominique can become more human. She pities Dauragon for being lonely and she was killed by him immediately afterward. In his rage, Sion chases him to the control room. However, if Kaldea lives, she persuades Sion to stop him.

In there, Mikado reveals that he'll rule the world with the satellite: as he would provide energy for those who'll follow his orders, and destroy those that don't. Sion forces Dominique into submission, and the process stalls. He was deeply sickened and outraged that his own sister was used as a tool for destruction! If the player unlocks the Extra Game, then he/she fights him three times, instead of the usual two. Volt frees Dominique from the controls, and she reveals she was having a nightmare killing many people. He promises she wouldn't have anymore now she's no longer being manipulated. Then she says the Galoes will return to Earth after being split in half, the back half will descend safely while the first one rams the satellite. If Kaldea is still alive, she gives them the tip instead of Dominique. They leave ad Sion is relieved that Kaldea will rest in peace.

Several weeks have gone, and during Sion's shift, it could play out many different ways: he'll have a flashback sparring with Wong if he's chosen during the last fight, or if Kaldea lives he'll recall her last words as she sacrifices herself before the Galeos splits. Then Dominique shows up and she's happy that Sion is wearing the pendant, the game ends with an embrace.

If the player chooses Sion during the final fight, there is a scene after the credits when he met Dominique for the first time.

Compared to the other two protagonists, Sion has the best balance of power and speed. His specials comprise a variety of throws, punches, and kicks, including an unblockable spinning punch. 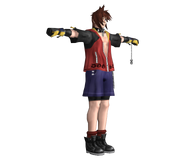 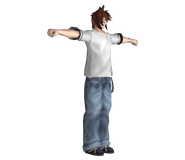 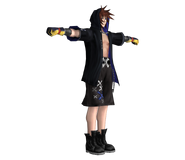 Sion's unlockable in-game model
Add a photo to this gallery

Retrieved from "https://square.fandom.com/wiki/Sion_Barzahd?oldid=11861"
Community content is available under CC-BY-SA unless otherwise noted.